We watched many informative videos on sound and took notes. Afterwards, we used the knowledge we gained to create a music piece for our video.

Compose Music For Your Film Notes 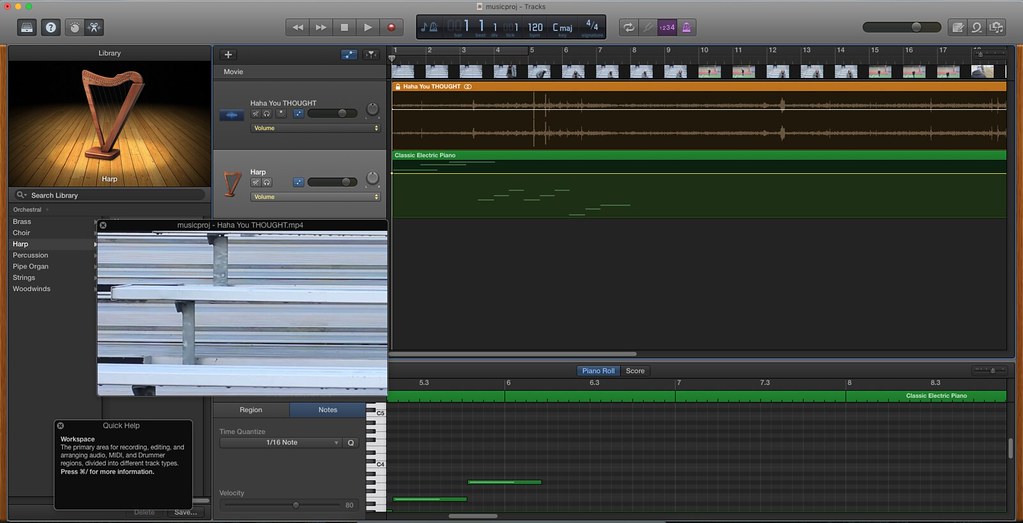 This is our video with music added on in post-production. I only added intro music to the beginning of the film. I used a major triad at the beginning and a minor triad later in the film, along with another triad but with a different root note.

After watching many videos and taking many notes, I learned how to compose music without ever even having to learn how to play an instrument let alone touch one. I learn that you can compose different types of songs for different scenes with the use of software and simply techniques used in composing such as the triple triad. I’ve also learn that you should experiment with music and shouldn’t be afraid of it. I solved simple problems like not remembering which triad was major or minor by looking back at my notes and checking them.

I filmed the initial project with my crew and afterwards, we went to record sound effects for our film. Then, I went into GarageBand to apply the sound effects to the film and added my own music.

Film Before Foley and Sound Effects

This is what we filmed before we added foley and sound effects.

Film After Foley and Sound Effects 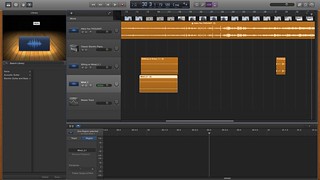 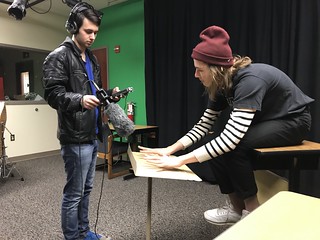 Although this is not me, this is one of the techniques we used for recording sound effects. This is how we recorded the sounds for Orland sitting down on the bench and for the footsteps of the metal bleachers.

Footsteps on Grass – Brushing feet against the carpet

Footsteps On Metal Bleachers – Walking on a music stand

Single System Audio Setup – Audio records directly into and with the camera.

Double System Audio Setup – Audio records separately from video, if audio is recorded with the camera anyways, it is used as sync or scratch track.

Quantized – Split up into many samples and having those altitudes measured. More measurements lead to more accurate sound.

Sampling Rate – How often the sound is quantized, measured in kilohertz (not the same as pitch or frequency).

Bit Depth – The amount of amplitudes of different value that each sample can be (actual number can be found by calculating two to the bit depth power).

Preamp – A device that boosts the signal of the microphone so audio can be recorded. Preamps found in and for cameras are usually louder than in double system audio setups.

Unbalanced Analog Cable – Simplest and cheapest type of cable. Has a ground wire and a hot wire for audio without sound from outside sources.

Balanced Analog Cable – Used more for professional microphones. Has a ground wire, the hot wire, and a cold wire. The cold signal records sound reversed in polarity, then at the end is reversed back and added to the hot. This cancels out any interference with the wires.

Impedance – A measure of the devices resistance to AC current. Measured in Ohms Ω.

Inverse Square Law – Sound dissipates according to the inverse square law. The power of the sound wave decreases by the inverse of the square; if the distance between the microphone and source of sound is doubled, the sound will dissipate to 25% of what it was before.

Proximity Effect – When the bass frequencies are boosted because of how close the source of sound is to the cardoid microphone. Fattens the sound.

Boom Mic – A microphone (usually shotgun) on the end of a pole to allow the source of sound to get closer to the mic.

Foley – named after Jack Foley, can be broken down into three categories; footsteps, cloth, and props

One issue I had during editing was the volume being too loud or too quiet. To solve this, I searched up tutorials on how to adjust the volume of audio clips in GarageBand.

During this project, we assembled a team to make a film that’ll invoke emotion. We decided on a plot and started filming. We scouted the location to see where we would put the camera and how to place the camera so everything that’s needed in the shot, is in the shot. Once we filmed all necessary shots, we started editing the shots and did ADR. 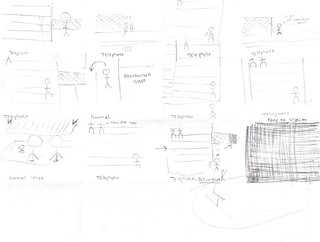 This is our storyboard. Each shot was carefully thought out and planned. For example, in the shot with the feet behind him, it was to create suspense. Since no one else is there on the bleachers and you can’t see their face, it creates a mystery and possible sense of danger. Not being able to see someone’s face makes us feel uneasy and therefore, suspense. 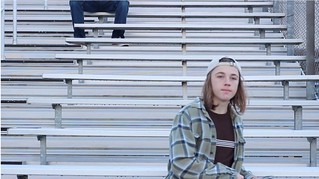 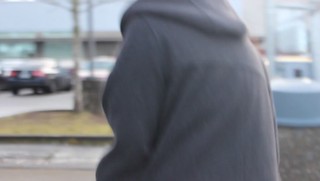 Although I wasn’t present during post-production, I would’ve worked with the editor to make sure to include certain shots. I also would’ve discussed the ADR with the actors and sound person. For example, in this shot we could’ve added footstep sound effects

A problem during production was focusing. Although I wasn’t there to solve this problem, I believe a solution would’ve been to practice focusing on the subject before filming. Throughout the filming process, I learned how to make a film that’ll invoke emotion within the audience.

The Filming Techniques Of Hitchcock